Why We Love Genetics: A Group Post by The Staff of The DNA Exchange 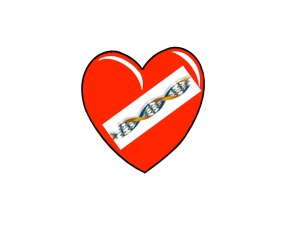 information, something that grabbed your attention and made you say “Hey, that’s pretty cool. I want to learn more about this field.” Sure we all want to help people and be good counselors, but the intellectual stimulation of the complex field of genetics also plays a critical role in keeping the spark in your career relationship.

So, in a slightly belated Valentine’s Day posting, we wonks and nerds here at the DNA Exchange (well, there is no “here” here, just 5 of us who email back and forth on an irregular basis) decided to provide some Genetic Factoids that caught our fancy. They include the profound, the moving, the questionable, the near sensationalist, and some gee whiz stuff. Be stimulated by them, have fun with them, and in the Comments section, share your fave facts about genetics with our readers.

♥ During the course of mammalian evolution, the RNA of  retro- and other viruses have become integrated into host genomes, thanks to that clever devil of an enzyme, reverse transcriptase. Currently about 8% of the human genome is derived from these viruses. And these are not just inconsequential inert bits of DNA. Some viruses play a critical role in mammalian biology. For example,  the HERV-W retrovirus plays an important role in placental physiology, and, by one estimate, 0.4% of human genetic diseases are the result of insertions of Alu elements of retroviral origin. On top of that, about 90% of the cells in the human body are not actually human, as we are inhabited by a large populations of bacteria and other microbes (biology makes for strange bedfellows). Among other things, this calls into question just how much we are defined by “our” DNA, as well as  how we delineate the borders between species. It also makes me smile about our growing obsession with germophobic practices. (Horie M, et al. Endogenous non-retroviral RNA virus elements in mammalian genomes. Nature , 2010, 463:84-7; Ryan F.  Human endogenous retroviruses in health and disease: a symbiotic perspective. J R Soc Med, 2010, 97:560-5.; Katzourakis A, Gifford RJ. Endogenous viral elements in animal genomes. PLoS Genetics, 2010, 6(11):e1001191)

♥ The largest mammalian gene family has nothing to do with placentas, fur, intelligence, or  behavior. Instead,  the award for body system with the most DNA devoted to it goes to the olfactory system. Three percent of the human genome codes for olfactory receptors, more than the combined total of genes devoted to immunoglobulin and T-cell receptors. The smell of love is in the air, we have the genes to help us detect it, and Chanel takes advantage of that. (Shepherd GM  Neurogastronomy: How the brain creates flavor and why it matters. 2011.  Columbia Univ. Press)

♥ During the early 1990s, two out of three of deaths among men with hemophilia were the result of AIDS related complications, the majority of which were young men who had acquired the virus during transfusion treatments. In 2009, about half of all people diagnosed with hemophilia in the United States were infected with the Hepatitis C virus. One disease’s cure is another disease’s cause (vide infra, PKU) (Committee Reports, 111th Congress (2009-2010), House Report 111-220, Departments of Labor, Health and Human Services, and Education and Related Agencies Appropriation Bill, 2010.;  Soucie JM et al. Mortality among males with hemophilia: relations with source of medical care. Blood. 2011. 96:437-42.)

♥ In the United States in 2009, there were as many babies exposed to maternal PKU as there were babies born with PKU. Given the inadequate funding for follow-up of patients who have genetic diseases detected by newborn screening and the potentially harmful effects of maternal PKU, the benefits of PKU newborn screening in preventing developmental disabilities hang in a delicate balance. It also makes one wonder what surprises the law of unintended consequences holds for expanded newborn screening (vide supra, hemophilia). (Resta R (2012) Generation n + 1: Projected Numbers of Babies Born to Women with PKU Compared to Babies with PKU in the United States in 2009. Am J Med Genet (in press).)

♥ A study of 194 DNA exonerations of criminal convictions found that witness/victim misidentification was a factor in 75% of wrongful convictions. False confessions were obtained in 30% of the cases, and jailhouse/government informants played a role in 22% of false convictions. Invalid forensic science testimony played a significant role in wrongful convictions, including serology (38% of cases, mostly blood, saliva, semen, and vaginal fluids), hair comparisons (22%), fingerprinting (2%), and bite mark analysis (3%) (And CSI make it look so easy and objective). Of exonerees, 58% were African American, and 43% of crimes were classified as cross-race (i.e., a perpetrator of one race committing a crime against a victim of a different race). DNA  plays a critical role in the legal system. Still, I am shocked by proposed state laws that require collecting DNA at the time of arrest (not at the time of conviction). (Hampikian G, et al.  The genetics of innocence: Analysis of 194 US DNA exonerations. Ann Rev Genomics Hum Genet. 2011. 12:97-120.)

♥ About 8-9% of dizygotic twins are the result of more than one coition and 1/400 dizygotic twins born to married white women in the US are bipaternal. Some people are very romantic. ( James WH. The incidence of superfecundation and of double paternity in the general population. Acta Genet Med Gemellol (Roma).1993. 42(3-4):257-62.)

♥ Elizabeth Taylor’s thick eyelashes were the result of a mutation in FOXC2, which can cause lymphedema-distichiasis syndrome (though she did not appear to have “photo”-phobia). (Elizabeth by J. Randy Taraborrelli, Grand Central Publishing, 2006).

♥ Because of a mutation and in-breeding, the town of Sao Pedro, Brazil has a 10% rate of twinning. Most of the twins have blue eyes and blond hair, which had raised suspicions that the unusual number of twins was the legacy of some peculiar science experiment by German ex-pat in hiding Josef Mengele (Nazi ‘Angel of Death’ Not Responsible for Town of Twins,  New Scientist, January 27, 2009).

♥ Levels of gene expression for genes involved in fighting infection are lower in people who are lonely, according to researcher Stephen Cole (Ah, yes, but the lonely suffer less from heartache).(Cole S. et al., Social regulation of gene expression in human leukocytes. Genome Biology, 2007, 8:R189).

♥ In a study by Muscarella and Cunningham, males and females viewed 6 male models with different levels of facial hair (beard and mustache or none) and cranial hair (full head of hair, receding and bald). Participants rated each combination on 32 adjectives related to social perceptions. Males with facial hair and those with bald or receding hair were rated as being older than those who were clean-shaven or had a full head of hair. Beards and a full head of hair were seen as being more aggressive and less socially mature, and baldness was associated with more social maturity.Of course, social maturity is very difficult to measure in men. (From: http://en.wikipedia.org/wiki/Baldness; Muscarella, F. & Cunningham, MR. The evolutionary significance and social perception of male pattern baldness and facial hair. Ethology and Sociobiology, 1996, 17 (2): 99–117. doi:10.1016/0162-3095(95)00130-1).

♥ If you were to recite the ATCG sequence in your own DNA (which is 3 billion bases pairs long) and uttered 100 ATCG sequences per minute without taking a break for sleeping, eating, or drinking, you would speak for 57 long years. Not so helpful for maintaining close relationships.

♥ 1000 cell nuclei could be squeezed into a period mark at the end of a sentence. (http://www.geneplanet.com/the_abcs_of_genetic_analysis/interesting_genetic_facts)

♥ A report in Scientific American in late 2011 looked at the websites that were most commonly linked to by science-lovers on Twitter. There are several flaws inherent in the “study design,” but regardless it is interesting to note that Genetics and Astronomy were very closely linked: meaning people who linked to Astronomy articles & content were more likely to also link to Genetics content and visa versa (Hey there Genetic Counselor, you with the stars in your eyes). Other interesting correlations included Physics and Fashion as well as the fact that Chemistry appeared to be an outlier, not being linked to any other science.
♥ In terms of heritability versus shared environmental effects, genetic factors account for 50-64% of an individual’s right-wing authoritarian attitudes with 0-16% due to shared environmental effects, while genetic factors account for approximately 54% of an individual’s extraversion, 49% of their conscientiousness and 57% of their openness with no appreciable shared environmental effects. (Bouchard TJ. Genetic Influence on Human Psychological Traits. Curr Dir Psychol Sci. 2004;13(4):148-51.)

♥ And, of course, let us never forget The Jumping Frenchmen of Maine.