The Genetic Information Non-Discrimination Act (GINA) of 2008 is widely regarded by the the genetics community as a critical piece of legislation. GINA provides safeguards against using genetic information to discriminate against healthy people when they apply for health insurance and employment. In what seems like a legislative fantasy from the perspective of today’s polarized American political climate, GINA passed by a vote 95-0 in the Senate, 414-1 in the House of Representatives (Ron Paul of Texas being the lone dissenter), and signed into law by President George W. Bush. It doesn’t get any more bipartisan than that.

I don’t know if anyone has ever studied the impact of GINA on utilization of genetic counseling and testing but my clinical experience, and I suspect that of many of my colleagues, is that discussion of GINA is a component of many genetic counseling sessions. The protections of GINA play a key role in the decision of many of my healthy patients to decide to undergo genetic testing (although Americans have divergent views about health insurance, they have broad feelings of mistrust of health insurers). I am pretty sure that support of GINA among genetics community is as unanimous as it was among the 2008 Congress. Unanimous, that is, except for me. Well, kind of.

Now hear me out before you consign me to Tweet Hell (which, if Dante were to write the Inferno today, he would include it as a 10th circle of Hell, below the 9th Circle of Treachery’s frozen lake where Judas Iscariot resides for sub-zero eternity). I have not sold our genetic savior for a sack of silver and I am not opposed to protecting people from discrimination in insurance and employment. With the future of health insurance in America in question, the prospect that GINA or the Afforable Care Act might one day be repealed gives me a serious case of the fantods. My criticism is that GINA is unfair to people who might suffer discrimination in health insurance for non-genetic reasons. 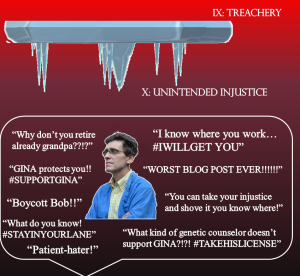 GINA is an example of genetic exceptionalism, the term coined in 1997  by the widely respected bioethicist Thomas Murray to describe the belief that “genetic information is sufficiently different from other kinds of health-related information that it deserves special protection or other exceptional measures.” Genetic exceptionalism has implications for other aspects of genetic medicine in addition to health insurance protection, as my DNA Exchange colleague Allie Janson-Hazell discussed some 8 years ago. Genetic exceptionalism has generated a quarter century of unresolved debate, with supporters waving it as a banner and critics using it as sword to attack the other side. Like Murray, I am critiquing GINA from the perspective of distributive justice – the just distribution of goods and resources.

The starting point of my argument is that, in the absence of compelling reasons otherwise, everyone should have equal access to affordable health insurance. From that perspective, GINA gives the appearance of being a good thing because it helps produce a more equitable distribution of medical insurance among healthy people who have a family history of a genetic condition or who carry a pathogenic mutation. But this is where genetic exceptionalism rears its head. What is it about genetic information that is so special that it requires its own piece of protective federal legislation? There are many other bits of health information of equal or greater import in predicting future health. My own hemoglobin A1C and fasting glucose levels for one, which are in the “prediabetic range” (though I could be “cured” simply by moving north a hundred miles to Canada, where the cut-off for an elevated A1C is higher than in the US). A perverse effect of GINA is that – should the Affordable Care Act be repealed – my A1C levels could be used against me in applying for health insurance but I would be protected from that same discrimination by GINA if a polygenic risk score, a more uncertain predictor of diabetes than A1C or fasting glucose levels, indicated I had an increased chance of developing Type 2 diabetes.The same could be said for lipid levels, blood pressure, Protein C levels, HPV status, and any of a number of other data points that are uncovered when doctors start probing around in the fluids and bodies of healthy patients.

The net effect of GINA when it passed, and could happen again if the Affordable Care Act is repealed, is an unfair distribution of health insurance such that healthy people who have non-genetic risk factors are not afforded equal protection. And, to pack the wound with some salt, this “non-genetic” risk pool could wind up paying higher insurance premiums that result from greater costs incurred by insurers for covering protected people with genetic risk factors who eventually develop breast cancer as the result of a BRCA pathogenic variant or Huntington disease due to an HTT pathogenic variant.

So GINA falls short in the bigger picture of distributive justice. By privileging genetic information, arguing that it is somehow more important than other medical information, GINA results in economic and health care inequities. The unintended implicit territorial message of  the genetics community’s praise of GINA is “Hey man, our patients are protected and that makes GINA a good thing.” But the good that GINA achieves can lead us to ignore its downsides. As I have argued before, our sense of Do-Goodism can create significant blind spots. It is difficult to defend a law as being just if it privileges one group of people at the cost of harming or excluding another group of people for what appear to be arbitrary reasons. GINA is a symptom of America’s ailing health system, not a cure.

Thanks again to Emily Singh for her graphics work.