Demographics and The Future of Genetic Counseling

Those who do not study and prepare for the future are doomed to live it rather than to shape it. Keeping an eye on what might be coming down the road in the next 30 years could help genetic counselors play a key role in 21st century medical care. Let’s look at the some of 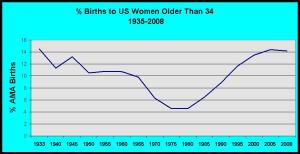 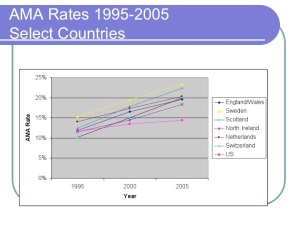 the demographic factors that got us here and then try to figure out where things might be headed.

Since about 1980, genetic counselors have been surfing a significant and unrelenting demographic wave – delayed childbearing. The AMA rate (the percentage of pregnancies to women 35 and above) increased virtually every year from 5% in 1980 to  nearly 15% in 2008; this pattern is even more pronounced in many Western European nations. We were in the right place at the right time. With apologies to the Beach Boys, we caught a wave and we were sittin’ on top of the world. Incidentally, I have noticed an ever so slight flattening of the AMA rate in the US over the last few years; I am not saying that it’s a close out yet or that we should grab the next ankle buster that rolls in, but we should be keeping our eyes open for a different demographic heavy.

The AMA rate also helped to shape the ethos and face of genetic counseling. The Holy Ethical Trinity of genetic counseling – autonomy, informed consent, and reproductive freedom – is worshiped by the largely liberal and progressive AMA population. Not surprisingly, the demographic profile of genetic counselors broadly reflects the patient population they serve, i.e., middle to upper middle class well-educated white women. We have more or less been the socioeconomic, physical, and ethical mirror images of our patients.

Trends, of course, have a habit of being temporary. The AMA rate will likely eventually decline as socio-economic factors change, reproductive preferences fluctuate , and political  moods swing. So what other demographic trends might influence the future of genetic counseling? Here are some population projections for the year 2050, based on a report from the Pew Research Center:

What might this mean for the practice and profession of genetic counseling profession? For simplicity’s sake, I am ignoring other factors that can influence the future of the profession, such as advances in medical technology, new health care delivery models, and changes in the economics of medical services.

First off, we must increase the ethnic diversity of the genetic counseling profession so that we – and our support staff – reflect the demographic make-up of our patients. This can  help overcome significant social and psychological barriers to medical services and improve the cultural awareness and sensitivity of the profession. Perhaps we can take a lesson from Canada, where immigrants already comprise 20% of the population. Secondly, the guiding ethical and counseling principles of the profession must evolve to be in tune with the many and varied beliefs of an ethically and ethnically diverse population.  Not every culture buys into the supremacy of individual autonomy, nondirectiveness, or other lofty ethical principles of Western medicine.

An aging population means that we will be seeing more patients who are physically and cognitively impaired. The traditional educational and counseling models utilized by genetic counselors may not be particularly effective for this segment of the population. Because it may not be so easy for older individuals to navigate to and around large urban medical centers we may need to increase our presence in alternative medical care settings. From a clinical standpoint, we will also need to be sensitive to new or unanticipated manifestations of genetic diseases.

Where do you see the genetic counseling profession in the next 10, 20, or 30 years? What demographic trends do you think are important? How can we best prepare ourselves? What did I miss? Where do you disagree with me?