But this could change if Congress passes H.R.3235 – the Access to Genetic Counselor Services Act, along with whatever version winds up in the Senate. This bipartisan bill would allow appropriately certified genetic counselors to be covered by Medicare and to order genetic tests as local licensure permits. The bill has broad support in the medical community. Even the AMA has stated they will not oppose the bill.

So why in God’s name has the American College of Medical Genetics and Genomics (ACMG), the primary professional organization of MD clinical geneticists, made the bone-headed decision to come out against this bill, even when many genetic counselors are members of ACMG? ACMG claims that they would support the bill only if genetic counselors are not allowed to order genetic tests. This is an untenable position, especially in light of the abundance of data demonstrating that genetic counselors not only are savvy about ordering tests but having them involved in the process results in significant cost-savings and increases the accuracy of test interpretation. I might add that there are virtually no equivalent data demonstrating that clinical geneticists bring equal value and expertise to the ordering and interpretation of genetic tests. They probably do but, hey, show me the numbers. Furthermore, the anti-genetic counselor position is contrary to ACMG’s Vision and Mission to “to facilitate the delivery of quality clinical and laboratory medical services to patients and their families…” It’s hard to facilitate testing if  the country’s largest group of genetics providers are excluded from ordering genetic tests (there are roughly 2-3 times as many certified genetic counselors as there are certified clinical geneticists). 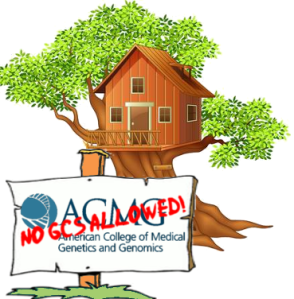 With the wider availability of prenatal testing in the 1980s, many genetic counselors found employment in prenatal diagnosis clinics, which were usually run by obstetricians rather than clinical geneticists. Genetic counselors gained a greater sense of independence and professional confidence serving as the genetics experts in these new settings. This expansion of genetic counseling employment beyond traditional genetics clinics was further stimulated by advances in genetic testing for more common conditions like cancer and cardiac disorders in the 1990s. Genetic counselors were not gonna’ work on Maggie’s Farm no more whereas clinical geneticists pretty much kept themselves down on the farm.

Economically, clinical geneticists are struggling to survive. Salaries are low and recruitment for fellowships is a struggle. Clinics are understaffed and wait times for an appointment in a genetics clinic can be as long as a year. Worse than running in place, they are losing ground. Thus, AMCG’s position on H.R.3235 gives the appearance of a desperate attempt to protect its shrinking economic and professional turf.

This is not 1980 and there aren’t any Genetic Associates anymore. Genetic counselors are damned good at providing genetic counseling and ordering and interpreting genetic testing. Genetic counselors know their limits; they aren’t looking to perform medical procedures, admit patients to hospitals, prescribe medications and other treatments, or undertake a comprehensive dysmorphology exam. In fact, in many states, local licensure laws already allow genetic counselors to order genetic tests if the patient has a private insurer or Medicaid (but not if the patient is covered by Medicare). I am not aware of any data suggesting that this has negatively affected the practice of clinical geneticists. It’s just made it easier for patients to access genetic testing, simplified navigation of the tortuous pathways patients must go through to obtain insurance coverage for testing, and helped assure that test results will be properly interpreted and integrated into the patient’s health care strategy.

But neither ACMG nor genetic counselors own genetic testing. Most clinicians, regardless of specialty, can order a genetic test. Heck, consumers can order tests themselves online, if they are so inclined. ACMG needs to better serve its membership and patients by adapting to a changing world and developing a different clinical and economic service delivery model. Opposition to H.R.3235 does not help patients, genetic counselors, or, if they cling to a dated view of medical practice, clinical geneticists themselves. ACMG must support H.R.3235 and recognize that genetic counselors play a critical role in the delivery of medical genetics services and testing.

You can contact your local congressional representative to express personal or organizational support fo H.R.3235.

Thanks again to Emily Singh for help with graphics.