Black-ish, Jewish-ish, and Scientific-ish: Some Problems Created By Racial Admixture

Race. I don’t think there is a more controversial and polarizing issue today. Skin color-based racial categories are considered scientifically invalid, yet race is included in government-collected population data as well as in scientific research.  But racial categories – real or imagined –  always create social problems. Those problems can become magnified – and the absurdity of classifications highlighted – when the discussion turns to racial admixture. Population genetics  tell us that no one is purely of any one race. Since hominids first wandered out of Africa, lust and wanderlust have combined to produce a species that is basically a bunch of “polyhybrid heterogeneous bastards.” The recent discovery of a fossil from a half Neanderthal/half Denisovan female in a Siberian cave proves that this genetic messiness has been going on for a long time.

Thomas Jefferson, for one, fretted about racial admixture. And not in an abstract or philosophical way. He was very much concerned with the practical question of whether the children he fathered with Sally Hemmings, one of the more than 600 slaves he owned throughout his life, would be considered black, and thus slaves, or white, and therefore free people. Hemmings was 16 and Jefferson was 46 when they conceived the first of seven children she was to bear by him. According to Virginia law at the time, a person who was 7/8 white was considered, well, white.

Hemmings had white ancestry; she was the half-sister of Jefferson’s (white) wife. As recounted in These Truths, Jill Lepore’s recently published delightful history of the United States, Jefferson engaged in some mendelian-sounding calculations about his children’s racial status (comments in brackets added by me):

In other words, Jefferson calculated that his 4 surviving children with the partially black Hemmings would be considered white under Virginia law and thus would not technically be slaves, even if they were de facto slaves. In practice, he freed one of the four during his lifetime, a second he “let” escape, and the other two were freed in his will. Incidentally, Jefferson was not alone among presidents in owning slaves –  18 US presidents owned slaves, some while they were in the White House. A seemingly insignificant bit of trivia underscores the inhumanity with which even the “good guys” viewed slaves – 9 of the teeth in George Washington’s dentures likely came from the mouths of his slaves (which, in a manner of speaking, would make Washington a racial hybrid – teeth of a black man, jaws of a white man). The slaves may have been paid for this but that hardly justifies the act. Ethically, it is no different than when desperately poor people sell their organs for money to feed their families. 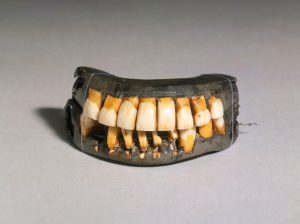 Medical geneticists have had to struggle with problems stemming from racial admixture and trying to define race. For example, one of the most common reasons for referral to American genetics clinics in the 1940s and 1950s was to determine the future racial appearance of children put up for adoption, often the product of trans-racial matings. Adoption agencies usually had a policy of trying to match the race of the child with the race of the adoptive parents. Some Southern states even passed legislation that banned trans-racial adoptions. Geneticists were often tasked with predicting the future physical appearance of children, based on their skin color or the presence or absence of certain traits thought to be more or less common in different races. By assigning a child to a specific race, geneticists also assigned that child to a social and economic life dictated by that race. No doubt many of these geneticists – like today’s genetic counselors – would never describe themselves as racists. Nonetheless, the clinical services they provided helped reinforce the pervasive racism of American society.

Current day geneticists continue to struggle with the problem of the biological validity of race and racial admixture. Mis-assigned or mixed ancestry, either by researchers or participants themselves, can lead to false conclusions about the pathogenicity of gene variants or generate false positive or false negative associations in SNP studies. We have also begun to see genetic ancestry tests, what some see as a modern pseudo-scientific racism, enter into the clinic. Genetic counselors typically query clients about their ancestry when constructing a pedigree. In my experience – which I am pretty sure is not unique – many patients respond that they have taken a direct-to-consumer ancestry test and then recite a scientific sounding breakdown of the different percentages of their genetic ancestry, e.g. 23% Welsh, 21% Irish, 10% French. Where this can become a problem is when it is used to guide genetic testing decisions. How much Ashkenazi Jewish ancestry warrants a specific genetic test or set of tests considered appropriate to that population (expanded carrier screening avoids that particular problem in some settings, but it has its own set of other issues)?

A recent referral to our clinic highlighted this dilemma. We were asked to see a patient for BRCA testing because she was reportedly Ashkenazi Jewish. As it turned out, an ancestry test had indicated that she was “1% Ashkenazi Jewish.” We have had several other referrals where this has come up. To keep our referring providers happy, we have very arbitrarily set a policy of a 10% rule – for patients who have had an ancestry, results should indicate at least 10% Ashkenazi Jewish ancestry before we consider them “Jewish.” Sort of our equivalent of Virginia’s 7/8 rule. Meshugunnah, I know. Never mind who your mother is.

Given the history of extreme persecution of Jews and other groups like the Rohingya in Myanmar or the Japanese Americans who were put into internment camps in the US during WWII, along with the rise of anti-immigrant sentiments and political intolerance, genetic testing that allegedly “proves” ancestry should be not be publicly available information. Somewhere, in some part of the world, at some future time, being “10% Jewish” or whatever ancestry could be a very harmful data point. Admixture can determine your life’s trajectory. Or enslave. Or kill.

6 responses to “Black-ish, Jewish-ish, and Scientific-ish: Some Problems Created By Racial Admixture”