A recent hereditary cancer multigene panel result got me to thinking again about the thorny problem of incidental findings in genetic testing. My goal here is not to criticize the lab, whose staff was very helpful and open in our discussions, but rather to encourage open debate about the scope of results that clinicians want from genetic testing and how this jibes with patients’ expectations. Our expectations might be quite different from what patients want, and this plays an important part at the end of this story.

My patient was recently diagnosed with breast cancer, and had a family history of breast cancer. One relative with breast cancer had already undergone BRCA testing, with normal results. The family history was non-specific but contained a hodge-podge of cancers that gets you to scratching your head – breast cancer, a primary brain cancer, a non-smoking relative who died before 50 of lung cancer, an aunt who died of some type of gynecologic cancer, and a few other malignant odds and ends. Given her relative’s normal BRCA results, we agreed that she would be best served by multigene panel testing, after a discussion of its potential downsides.

Like 87% of my patients, no cancer-linked pathogenic mutations were identified. However a pathogenic EPCAM point mutation caught me by surprise.

For those not familiar with the genetic architecture of Lynch syndrome, five genes are linked to Lynch syndrome – MLHL1, MSH2, PMS2, MSH6, and EPCAM. The underlying mutational basis is different for EPCAM than for the other 4 Lynch genes. EPCAM is MSH2’s upstream neighbor. Mutations in EPCAM itself do not directly cause Lynch syndrome. Instead, large gene deletions in the distal part of EPCAM result in loss of its poly A tail that should signal the end of the coding region. RNA transcription does not stop, leading to an EPCAM/MSH2 chimera of a transcript. By a mechanism not fully understood, this results in hypermethylation of the MSH2 promoter and absent/reduced expression of the  MSH2 gene product. EPCAM deletions constitute a small but significant minority of Lynch syndrome gene mutations and so labs routinely analyze EPCAM for large deletions. 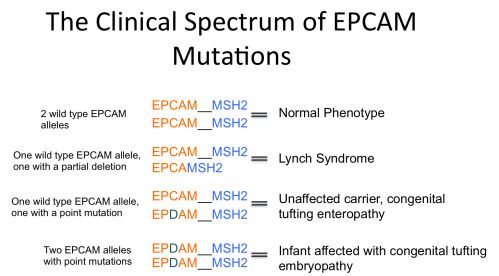 So why was the lab reporting a point mutation in EPCAM? My first (insecure) reaction was “Well, I guess point mutations in EPCAM cause Lynch syndrome. Just another in the steady stream of new genetic findings that flew under my radar but that everybody else seems to know.” I breathed a small sigh of relief and a temporary break from my professional insecurity when further reading of the report confirmed my understanding that point mutations indeed do not produce Lynch syndrome.

Autosomal recessive EPCAM point mutations are linked to congenital tufting enteropathy (CTE), an uncommon disorder characterized by diarrhea so profound that patients often require ongoing total parenteral nutrition. Clearly my patient did not have CTE nor did any of her children, who were all well past the age when CTE would have manifested. The issue here, as any genetic counselor will tell you, is for the health of her grandchildren. Each of her children has a 50% chance of having inherited the EPCAM mutation. If a child has inherited the EPCAM point mutation and if the child’s spouse is also an EPCAM point mutation carrier, then my patient’s grandchildren from this mating would have a 25% chance of having CTE. Essentially my patient’s multigene panel test was transformed into a carrier screening test for a metabolic disorder for the next generation (The punster demon in me who I cannot control just remarked “Her grandchildren’s risk? Now that’s real NextGen sequencing! Or maybe NextNextGen.”).

But, statistically speaking at least, the patient should not worry too much about her grandchildren. The frequency of CTE is between 1/50,000 and 1/100,000, which hardyweinbergs out to a carrier rate of about 1/135. Thus, the likelihood that my patient would have a grandchild affected with CTE is 1/2 (the chance that her child would be a carrier) x 1/135 (the chance that her child’s spouse would be a carrier) x 1/4 (the chance that the grandchild would inherit two mutated EPCAM alleles) = 1/1080. Using the time-honored genetic counselor’s trick of reframing, there is a 99.9% chance that my patient’s grandchild will NOT be affected with CTE. Did my patient really need to know this in the midst of her cancer treatment?

I recognize that some patients undergoing multigene panels are still in their reproductive years and this information could be important to them. And one could argue that this situation is no different from other genes included on multigene panels that are also associated with different disorders when they occur recessively – NBN, BRCA2, ATM, fumarate hydratase. But I would counter that those other recessive disorders are qualitatively different situations. The same type of mutations that predispose towards cancer when they occur in the heterozygous state also predispose towards ataxia telangiectasia and the other recessive conditions and so one cannot avoid knowing that the patients carries the mutation. However, EPCAM point mutations are not linked to cancer and thus are not relevant to the reason why the test was performed to begin with. The lab included the EPCAM point mutation because of the nature of their testing platform, which can’t help but detect EPCAM point mutations.

But should the lab have masked the results? Labs mask all kinds of genetic test results, hence the list of incidental findings that the American College of Medical Genetics recommends be reported to patients undergoing whole exome/genome sequencing even if they were not seeking that specific information (CTE is not on that list, though of course this patient did not have whole exome/genome sequencing). From a counseling standpoint, it might be an undue burden on patients to layer on a whole other level of psychosocial concern when they come to us primarily concerned about their cancer risks or treatment options and are not even thinking about their descendants’ risks of having rare genetic diseases. Another downside to reporting EPCAM point mutations is that it increases the frequency of finding variants of uncertain significance (VUS), the problem child of multigene testing. As fate would have it, a few days later another patient’s test revealed an EPCAM VUS.

So after stewing on this and discussing it with colleagues, I was considering asking the lab to mask EPCAM point mutations in the future. But then I met with the patient to review the results. Not only was she not upset, she was excited and grateful about learning the information. She said that she underwent the testing to learn what risks her family faced, and as far as she was concerned, the CTE risk fit into her expectations even though I had never discussed it with her beforehand. Nor is she apparently an outlier. At this year’s ASHG conference, researchers from the Kaiser Permanente Northwest Center for Health Research discussed the results of an ongoing study in which 320 non-pregnant women have been randomized into two groups that underwent carrier testing. 200 women received usual care and 120 women underwent genome sequencing for 750 carrier conditions and ~100 secondary findings. Women in the genome sequencing arm were required to receive results about life-span limiting conditions but could elect to receive results of all or some of five broad categories of findings (serious outcomes, mild outcomes, unpredictable outcomes, adult onset diseases, and medically actionable secondary findings). To date, 90% of those in the intervention arm have elected to receive results in all categories. Patients can’t seem to get enough genetic testing.

Maybe this enthusiasm stems from the excitement and sexiness of undergoing genetic testing, which for most people is a new thing and so there is still lots of gene spirit. Or maybe patients just don’t know enough to not want extensive genetic testing and eventually reality will set in when enough people undergo genetic testing and patients may become more reluctant to learn tons of questionably useful information (although the experience of 23andMe suggests otherwise). Maybe that day will come. But for now, whether genetic counselors like it or not, many – though by no means all – patients want to know a lot about their genetic make-up and want a choice in what they can know, even if it is not of immediate clinical value. The clinical utility of a test does not necessarily equal its emotional utility.

Cost is no longer a factor; until recently, genetic testing would include the minimal number of genes because of the expenses involved. Nowadays, however, it essentially is no more expensive to run 5 genetic tests on a sample than 500 genetic tests. Patients and their families are the primary stakeholders so patient demand and expectations should be an important factor in determining the shape of genetic testing, though genetic counselors should offer guidance through our wisdom and experience.

We also need to include all concerned parties in this discussion, such as the disability community and other patient groups affected by genetic diseases. And we need to serve as a counter-balance to some of the “Rah-Rah Ain’t genetic testing grand” advertising of some genetic testing labs. This will require open minds, finely honed counseling skills, and the development of new educational resources that will help patients better understand the bewildering array of genetic diseases and the strengths and limitations of genetic testing. At the end of the day, genetic counseling is still primarily a psychological encounter between two human beings. Here is where the future of genetic counseling lies.

13 responses to “Masking The Truth?”