Truth be told, I have reached  a point in my career where I question my relevance to the genetic counseling profession. I worry that the issues that concern and stimulate me are irrelevant to the current and future practice of genetic counseling, that I am stuck in a professional time warp where I am fighting yesterday’s battles and fretting about irrelevant ethical and clinical dilemmas. Maybe my work here is done.

Even more concerning is the possibility that younger patients may think that I cannot possibly understand their problems. They are at vastly different points in their life cycles than I. There is little overlap between our cultural reference points and we likely have distinctly different comfort levels with the technological advances of the last 3 decades. Who wants to be counseled by their father?

When I first started out as a counselor, I fretted that I was so much younger than my patients that they would not take me seriously. Now I struggle with how to relate to a 30-year-old female BRCA mutation carrier trying to decide whether she should tell her fiancé about her carrier status, and if should she have a prophylactic mastectomy, which in her mind might render her an “unfit” mother because she would not be able to breast feed. My insecurity has come full circle. Sure, good counseling skills should make those differences irrelevant, but still…..

The potential generation gap between me and my younger patients surfaced recently when I met with a woman whom I had initially met with in the 1990s when she was pregnant and amniocentesis had revealed an apparently balanced de novo translocation.* Because of our past experience together she requested to meet with me again because of her subsequent personal and family history of cancer.

Before we started addressing her current situation she told me that she wanted to let me know how much she had appreciated the counseling I had provided during her pregnancy nearly two decades ago. What she had found particularly helpful was a metaphor I had used to help her grasp the concept of translocations. “Bob, you described chromosomes as essentially being a set of encyclopedias, genes were the words in the encyclopedias, and DNA was the alphabet used to spell the words. A balanced translocation was like a few chapters from Volume 10 had broken off and joined Volume 4, and vice versa. You couldn’t say for sure if a few words or letters were lost as a result of the translocation, but as far as the lab could tell, the encyclopedia had all of the necessary information, just rearranged. The light bulb went on in my head, and I was able to make a decision to continue that pregnancy.” I am not claiming that I broke new counseling ground with this explanation; I suspect that many genetic counselors use some version of it.

She continued “My husband and I liked that imagery so much that we used it when we finally decided to tell our teenage son about his translocation.” After they broke the news to their son about his genomic constitution, the patient said that her son silently contemplated what he had just been told. The parents held their collective breath, anticipating a complicated genetics question or a deep emotional response. Finally, he looked up and asked “An encyclopedia – is that anything like Wikipedia?”

Well, I thought, I wasn’t just being paranoid about my relevance to genetic counseling. Even my Genetics-To-English Dictionary is obsolete. I really do need to think about packing it in as a counselor and taking an administrative position with no patient contact. 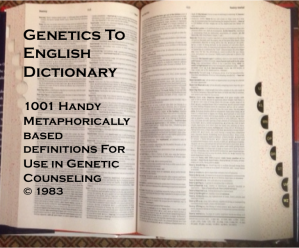 Rare First Edition of the Genetics To English Dictionary

After I recovered from that shock, I got to thinking more clearly about their son’s statement. Hey, I thought, maybe I could update my Genetics-To-English Dictionary and appropriate the Wikipedia metaphor to my current work in hereditary cancer. Wikipedia is essentially the genome. It contains a lot of information, but some of that information is inaccurate and needs to be corrected and updated, much as DNA can acquire mutations and needs to be repaired. Mismatch repair proteins, the culprits in Lynch syndrome, are like the anonymous editors who vigilantly proofread Wikipedia, reporting and correcting typos to restore the integrity of the information. When the mismatch repair protein genes are mutated, the proofreaders are less accurate, DNA damage accumulates in the cell and eventually leads to cancer. In Lynch syndrome, the proofreader has a hereditary dyslexia.

Perhaps there still is some hope for me as a genetic counselor. But first I have to figure out how to stop my stupidphone from making that awful chirping sound. At precisely 3:12. AM. Every morning.

* – Some clinical details of this scenario have been changed to maintain confidentiality.