And Bob’s Your Uncle: A Guide To Defining Great Aunts, Great-Great Grandparents, First Cousins Once-Removed, and Other Kinfolk

When genetic counselors attend family reunions, their unofficial job becomes Namer-of-Relationships. “Keith, you and I are first cousins once-removed. Viola is my great aunt. Margo, you are my mother’s second cousin’s second wife so you would be…..well, some kind of in-law or kissing cousin, I guess.”  It gets confusing, even for experts. It is even more difficult for patients or referring providers who try to relate a family history of a second cousin with a cleft palate and a heart defect but who is actually a first cousin once-removed.

Below I have created a generic pedigree that illustrates the most common familial relationships in the kinship system of the modern Western English-speaking world. The pedigree undoubtedly contains errors and omissions. So, in the spirit of crowd sourcing, I encourage my fellow pedigree wonks to scrutinize it and report mistakes, mislabelings, missing relatives, and thoughtful commentary in the Comments section below (this would also be a great discussion topic for a few hours of a genetic counseling student seminar). 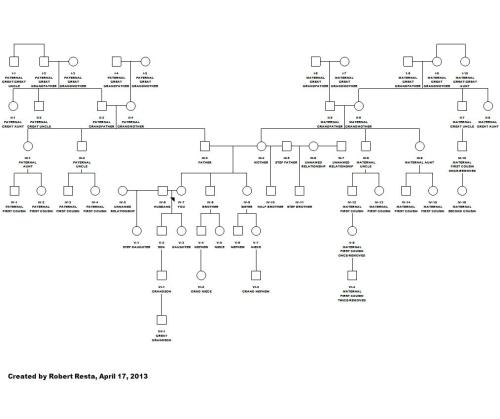 The accompanying explanatory table supplies details, controversies and inconsistencies. I am cowardly avoiding the complicated relationships that stem from assisted reproductive technologies such as donor eggs, donor sperm, surrogate mothers, etc. Of course, the person you decide to call Mother, Father, Uncle, Cousin, etc. is based not on genetic relationship but on personal experience, family preferences, and social norms.

For those not familiar with pedigree arcana, each individual is identified with a numbering scheme such that relatives in the first generation (at the top of the pedigree) are identified with a Roman numeral  (e.g., I) and an Arabic numeral (e.g., 2). This indicates, reading from left to right, that I-2 is the second person on the first line of the pedigree. The next generation down is numbered II, and so on. Thus, IV-7 is the seventh person in the fourth generation and who is the the proband or propositus, the reference point for the relationships. IV-7’s father is III-3, IV-7’s paternal great grandfathers are I-2 and I-4, and so on.

There seems to be no widely accepted guidelines for when to include hyphens in a relationship name (e.g., great-grandfather vs. great grandfather). Since this is my blog post, I get to decide the grammatical rules. Thus, because I tend to be a minimalist, I hyphenate only when there is more than one “great” in a title. In the pedigree, I-1 is a great-great-uncle, but I-2 is a great grandfather. I also use hyphens in “removed” relationships (e.g., first cousin once-removed) because, well, it just looks right. Stepmother seems to be more common than either step mother or  step-mother. However,  “stepbrother” is infrequent. For consistency, I recommend the spaced-but-not-hyphenated style for “step” and “half” descriptors” (e.g., half brother, step mother).

An alternative graphic to describe family relationships is the Canon Law Relationship Chart. 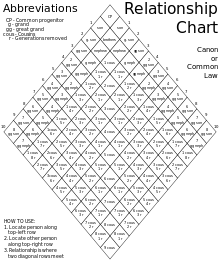 The relationships illustrated in the pedigree are described as follows:

Self, You, (AKA Proband, Propositus): IV-7, the person who is the reference point for  all relationships in the pedigree.

Step Parent: III-5, the new or former spouse of your genetic mother or father.

Full Brother: IV-8. Male siblings with whom you share both genetic parents.

Full Sister: IV-9. Female siblings with whom you share both genetic parents.

Half Sibling: IV-10. A sibling with whom you share only one genetic parent. Or, as one of my patients said to me the other day “She is my half of a sister.”

Step Sibling: IV-11. A sibling with whom you share no genetic parents, e.g., the son  your stepfather had with his previous wife.

Step Child: V-1. The son or daughter that your spouse had with a previous spouse.

Grandfather: II-3, II-5. The father of your mother or father. But note the inconsistent use of grand and great. The brother and sister of your grandfather is your great uncle and great aunt (vide infra, Great Uncle, Grand Nephew). Presumably the word stems from the French grand-père, which itself goes back to the 12th century. Prior to the French influence, a grandfather was referred to as a grandsire, and prior to that, in Old English, the Germanic-derived ealdefæder or eldfader.

Grandmother: II-4, II-6. The mother of your mother or your father.

Great Uncle: II-2, II-7. A brother of one of your 4 grandparents.  I thought about recommending the  less commonly used title Grand Uncle (or Grand Aunt) because these individuals are in the same generation as your grandparents. When they are referred to as Great relatives, it seems to imply that they are in the generation prior to your grandparents’ generation. I suspect, though, that Great is so well established that it is unlikely to replaced by Grand. And you share more genetic information with your Grandparents than you do with your Great Uncles, so perhaps using Great rather than Grand is an acknowledgment of that genetic difference (vide supra, Grandfather; vide infra, Grand Nephew vs. Great Nephew).

Great-Great Aunt: I-10. A sister of one of your 8 great grandparents.

Great Nephew (Grand Nephew), Great Niece (Grand Niece): VI-2, VI-3.  The son and daughter, respectively, of your nephew or niece. In genealogy circles, it is more common to use Grand rather than Great, on the basis that this relative is as many generations removed from you as your grandparent is, only in the other direction. However, in my view, if the siblings of your grandparents are Great Uncles and Great Aunts, then it seems to me that there is greater symmetry in calling them Great Nephew rather than Grand Nephew. Besides, you share as much genetic information with your Great Nephew as you do with your Great Aunt, so from that standpoint it makes more sense to go with Great rather than Grand (vide supra, Great Uncle, Grandfather.

Second Cousin: IV-16.  The children of your parents’ first cousins.

First Cousin Twice–Removed: VI-4. The grandchildren of your first cousins.

84 responses to “And Bob’s Your Uncle: A Guide To Defining Great Aunts, Great-Great Grandparents, First Cousins Once-Removed, and Other Kinfolk”