Myra I. Roche, M.S., C.G.C. is an Associate Professor in Pediatrics, Director of Pediatric Genetic Counseling Services, and an investigator in the Center for Genomics and Society at UNC, Chapel Hill.  Her research interests include parents’ understandings of genetic information and their genetic counseling experiences following acceptance of newborn screening for fragile X syndrome.  She co-edited An Ethics Casebook for Genetic Counselors: Ethical Discourse for the Practice of Genetic Counseling, serves on the JGC editorial board, and was chair of the ABGC Certification Exam Committee.  She has worked at UNC for the past 25 years, living in the same house for the last 24.  Her favorite past-time is walking.

“Women are notoriously bad at asking for raises, and as 95% of our field is women, we have suffered the consequences.”

This statement recently appeared on the NSGC listserv with a plea for participation in a salary survey, an extremely important task for a young, thinly-populated profession like genetic counseling. What struck me hard, though, was the echo of a well-worn misconception 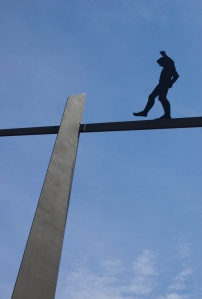 promising a simple explanation for the pay discrepancy between the genders. The answer: women just aren’t good enough- at being men. This evaluation of women’s negotiating skills is not new and is best summed up by Professor Henry Higgins’ exasperated rhetorical question, “Why can’t a woman be more like a man?” But shouldn’t we be suspicious when righting an inequality requires the “have nots” get better at imitating the “haves”? The fault lines here are clearly drawn.

Yes, the playing (and paying) field between the genders remains uneven. Sorry to be the one to bring this up for the 15 billionth time. Currently women make, on average, 77 cents for every dollar a man makes. Analyzing salaries across genders is full of pitfalls but even after several corrections, the disparity remains (pdf). If you don’t know the facts, see this National Committee on Pay Equity Quiz.

Admonitions that women have only themselves to blame are old but the twist, “thanks for dragging me down with you”, strikes a new, blatant tone that is shocking. If women would just stiffen up their collective lips, stride into their bosses’ offices carrying their weight in unequivocal salary data to prove they are underpaid, well, what’s been stopping them? But if poor negotiating is the culprit, how can it be that women, long stereotyped as being superior wheedlers (particularly of men) to get their way, would inexplicably fail to wield these same skills when more money is the goal. Is this simply a lack of gumption?

As every good negotiator knows you have to be ready and able to walk when the answer is no. To walk, you need options. And good shoes. Women have had fewer options than men because they can become pregnant- something that was, until only an evolutionary blink ago, uncontrollable. This monthly roulette, combined with fewer educational and financial resources, left them less able to walk away because they were barefoot, pregnant, or both.

Looking up from our respective grindstones, we see that women, ages 23- 30, have, apparently, arrived. In those who are college-educated and, not accidentally, without children, we find our proof of principle. Their salaries are comparable, or even exceed, their male counterparts.

Have they figured out how to act like men? Do they have more gumption? Or, do they just have better walking shoes?

Some have argued that women are very savvy negotiators because they understand how risky it is to ignore the social costs implicit in these transactions. When shown a video of a man or a woman asking for a raise, judges of both genders agreed that, yes, certainly, the man should get a raise. But the woman, speaking from the identical script? Nope, and furthermore, we don’t like her either because she is way too pushy. For a woman. Same script, opposite decisions.

For a women wanting a raise, Henry Higgins’ advice was dead wrong. Don’t act more like a man. Act more like a (stereotypical) woman. Be warm and friendly, show more concern for others than yourself, and figure out how to make the raise your team leader’s idea, not yours. Tellingly, women’s reluctance to negotiate for higher pay occurred only when the judge was a man.

Is more money always, unequivocally, without a doubt, better? For many women the answer is clearly no. Certainly not always better than being socially ostracized otherwise what else could be stopping them? As women walk toward more money, they are, at the same time, often walking away. Away from their safety net of people who individually and collectively support them. Add in children, elderly parents, and lots of other factors and the tightrope beings to sway even more, making walking a very precarious choice.

Yes, definitely, arm yourself with all the salary data you can, stride briskly into that office, and try to convince your boss that it was her idea. I applaud your efforts even as I keep my fingers crossed. I hope you get the raise you believe will make you happier. But sometime soon, put yourself in someone else’s shoes. Maybe more money will make you happier. But for women in other shoes, the figures may add up differently. No need to shame others who have done their own math and calculated that the timing is wrong, they can’t afford to waste precious social capital or, frankly, their feet hurt. To imply that colleagues who are not actively negotiating their salary are somehow responsible for anyone’s inadequate income smacks of nothing more than just shoddy reasoning.

Acknowledgment: Thanks to Elana Jones for her insightful editorial comments.