Improper kinds of food in the stomach and intestines, will, in this excessively irritable state of the system, cause nocturnal emissions……Farinaecous foods, properly prepared, is incomparably the best aliment for such a sufferer.….

– from A Lecture to Young Men (1838) by Sylvester Graham, Inventor of Graham Crackers

Most scholars point to the early 18th century as the beginning of the Western World’s repulsion/fascination with masturbation. In about 1712, an anonymous author published a pamphlet titled Onania; or The Heinous Sin of Self Pollution and all its Frightful Consequences, in both SEXES Considered …. (the title goes on for another 30 words or so) that describes the physical and psychological toll taken on those who engaged in what was politely called “the solitary vice,” as well as advice on how to treat the newly-minted medical condition.  Onania appeared in multiple editions throughout Europe and the United States. Over the next two centuries numerous similar publications followed , all  variations on the same theme, i.e. men and women needed to be saved from the debilitating effects of this evil practice (WARNING: This video link is somewhat risqué).

In America, one of the most committed anti-masturbationists was John Harvey Kellogg, a respected surgeon who believed that a vegetarian diet and vigorous exercise promoted physical and emotional health. Kellogg was particularly concerned that sex, including sexual relations between husband and wife , was detrimental to health and well-being (all of his 42 children were adopted or foster. He and his wife slept in separate bedrooms and proudly spoke of their lack of a sexual relationship). The most debilitating sexual behavior was masturbation, which, according to Kellogg,  could be identified by any of 39 signs such as general debility, early signs of consumption, premature and defective development, failure of mental capacity, love of solitude, unnatural boldness, mock piety, paralysis, and eating clay, slate pencils, plaster, and chalk.

Concerned as he was with individual purity, it is not surprising that Kellogg was interested in racial purity. In 1906 (the same year his brother Will founded what would eventually become the Kellogg Cereal company), he established the Race Betterment Foundation in Battle Creek. The Foundation, one of the key eugenic centers in the United States, sponsored 3 conferences on race betterment, collected eugenic family histories, and worked with other eugenics organizations around the country. 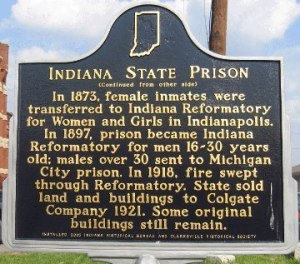 Sharp, like many of his contemporaries, became interested in eugenics.  From his viewpoint in a penal institution, he saw a world overcrowded with indiscriminately breeding mental and physical defectives: “The class of individuals is very prolific, from the fact that in the matter of sexuality, as in everything else, they know of no self-restraint. They indulge their selfish lust, ab libitum, with no thought whatsoever  as to what the result may be…..They simply know that they want gratification, and gratification they are going to have.” Sharp wanted to curtail reproduction among those with defective germ plasm.  After dismissing alternative approaches like marriage restriction laws, castration, and segregation, he championed vasectomy  as the cure for eugenic degradation because, in his view, the procedure was quick and easy to perform, had no serious side effects, did not hamper a man’s pursuit of life, liberty or happiness, and “it is endorsed by the persons subjected to it.” Sharp performed 456 eugenic vasectomies between 1899 and 1908. Note that Indiana did not enact a mandatory sterilization law until 1907; in 1909, Indiana governor Thomas Marhsall ordered a moratorium on sterilizations (In an odd historical connection to another well-known consumer products company, the reformatory eventually became a factory for Colgate-Palmolive).

It is easy to dismiss Kellogg as a, well, flake, and Sharp as a narrow-minded crank. Yet in many ways society has benefited from both men (though not in the ways they intended). Neither man fits neatly into labels like eugenicist or eccentric. They were complex men who were  products of their complicated times. Eugenics, anti-masturbation preaching, health foods, and vasectomy were all “in the air” in the late 19th century, and it is not surprising that their paths should criss-cross.

There is an ironic modern twist to the end of this tale. The state of Washington recently enacted legislation granting licensure to genetic counselors. In completing my license application, I was required to affirm that I have never been convicted of “frotteurism.”  I have never been accused or convicted of any crime but I could not honestly answer the question because I didn’t know the meaning of frotteurism, so I looked it up: the practice of touching or rubbing against the clothed body of another person in a crowd as a means of obtaining sexual gratification. All those bowls of cornflakes and graham crackers from my childhood finally paid off.