Genetic tests now sold in drugstores! Or not.

Well, it has been quite a week in the world of genetic testing! For those who haven’t been following the gene drama (or haven’t been able to keep up), I’ve provided a summary of the week’s events below.

Monday, May 10 Pathway Genomics’ test is considered a ‘device’ by FDA

The FDA Office of In Vitro Diagnostic Device Evaluation and Safety, sends a letter to James Plante, CEO of DTC company Pathway Genomics Corporation, pointing out that Pathway’s “Genetics Health Report” product appears to meet the definition of “device,” and therefore requires an FDA clearance/approval number. They request that their approval number be provided. [Of note, Pathway DTC genomic testing has been available online since July 2009].

Tuesday, May 11 Washington Post runs story about gene tests being sold in drugstores

The Washington post runs the story that personal genomic testing company Pathway Genomics was getting set to offer their genetic testing kits at Walgreen drugstores across the country.

Beginning Friday, shoppers in search of toothpaste, deodorant and laxatives at more than 6,000 drugstores across the nation will be able to pick up something new: a test to scan their genes for a propensity for Alzheimer’s disease, breast cancer, diabetes and other ailments.

“Distributing genetic testing through pharmacies will expose more people to its availability. However, people should first meet with a genetic counselor to determine whether genetic testing is right for them and to prepare for what they might learn,” said Elizabeth Kearney, NSGC’s president. 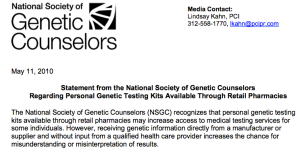 Daniel Vorhaus of the Genomics Law Report was quick to comment on the news, and published an impressive compilation of media and blogger reactions to the developing story.

Media outlets continue to follow the story, and FDA officials become increasingly vocal about their lack of support for the retail genetic test kit. Late Wednesday night, news breaks that Walgreens has decided they are revoking their decision to stock the genetic testing kits in stores.

In a statement, Michael Polzin, a Walgreen spokesman said, “in light of the FDA contacting Pathway Genomics about its genetic test kit and anticipated ongoing discussions between the two parties, we’ve elected not to move forward with offering the Pathway product to our customers until we have further clarity on this matter.”

Thursday, May 13 Pathway Genomics and others respond

We respect and understand Walgreens’ decision and we are communicating with the FDA about the Pathway Genomics InsightTM collection kit…We believe it is very important that anyone interested in a personal genetic test understand the information that will be contained in his or her report. That is why we have on staff Board certified/eligible physicians and genetic counselors that are available to speak with customers about their reports. We also encourage anyone considering purchasing a Pathway product to speak with our counselors.

Others continue to weigh in on the issue. Notably, Dan Vorhaus helps elucidate some of the complex issues surrounding regulation of direct-to-consumer gene testing and points out that personal genome tests are already available through retail outlets, such as 23andMe tests being sold through Amazon.com. The NSGC public policy blog provides a good summary of the issue from a genetic counselor perspective.

So here we are, Friday morning, the day that Pathway’s tests were scheduled to hit drugstore shelves. But instead of curious consumers flocking (or not flocking) to their local Walgreens, we are instead right back in the middle of a DTC regulation debate. A debate that seems to me to be incredibly reminiscent of June 2008, when the California department of Public Health issued “cease and desist” orders against 13 DTC companies. I look forward to watching how this plays out.

Beyond the actual events of this week, what has been so incredible to me is the quick response and coverage of this story within the genetic counseling community. Because I don’t work in a position where I can monitor twitter, I have relied heavily on the NSGC listserv this week in keeping up on the breaking news. So a big thank you to all those who kept the community up-to-date using this private forum. And I’m impressed with the speed at which the NSGC position statement and public policy blog post were put together. If this same situation had occurred a year ago, I highly doubt the public response from the GC community would not have been so urgent or visible.

One response to “Genetic tests now sold in drugstores! Or not.”