“You are from the Glenn Beck Show?” I asked. My voice betrayed what for lack of a nicer word might be called skepticism.

“The Glenn Beck Show,” she answered, her tone sliding past defensive into a smug I-know-what-you-are-thinking defiance that reminded me wordlessly of Fox News’ Nielsen dominance.  “We were wondering if you would like to come on the air tonight, to discuss newborn screening.  We are interviewing a woman who is suing the state of Minnesota for taking her child’s DNA without parental consent.  We were told you might provide some expertise on the issue.”

A quick succession of questions went through my head.  What was something as routine as newborn screening doing on the Glenn Beck Show?  What expertise were they looking for from me?  I reviewed what I knew on the subject.  Our system — a hodgepodge of opt-in and opt-out, implied consent and presumed consent – state-by-state regulations put in place in a simpler era, when newborn screening meant looking for PKU and a handful of other conditions.  It was not a system designed to handle today’s complex screening panels, and certainly not the use of newborn screening samples for research on genetic disease, birth defects, environmental exposures, chromosome studies and the like.  The topic interested me.  Being on television interested me.  Could I say yes?  Absolutely not, I told myself sternly.  This was Glenn Beck.  Who knew what crazy angle they would take?  There might be shouting.  What if he cried?  What on earth would I do if he cried?

I was in New York, she noted, so I could come in and sit with Glenn in the studio.  With Glenn.  We were on a first name basis now, me and Glen.  Oh dear, I thought – or perhaps it was some other four letter word starting with ”sh”.  I poked around on the internet, searching for a few salient facts.  Minnesota tested for 53 conditions, 24 more than the 29 “core conditions” the ACMG designated top candidates for newborn screening.  The state permitted the use of newborn screening blood spots for research, usually de-identifying the samples first.  If you had a child in Minnesota, his or her DNA might be used to check the incidence of CMV infection, or the feasibility of newborn screening for Wilson’s Disease.  There was a study of mercury exposure.

I barely had time to break into a cold sweat in my closet when the producer from the Glenn Beck Show called back.  “Change of plans,” she said.  “We’re going in a different direction.”  A different direction — I was no longer needed.  They liked some other expert better.  I felt that peculiar pang you feel when people you despise and disdain don’t love you.  It was like junior high school all over again.

And then I watched the show, which is to say there’s a first time for everything.  They hadn’t booked another expert in place of me (my heart gave a small, involuntary leap).  They had booked instead a state senator from Texas who was so completely insane that he made Glenn look reasonable by comparison.  The government was using newborn screening as an excuse to take DNA from children, the senator said.  That’s right, Glenn agreed.  It was like Nazi Germany, the senator insisted.  It could be, Glenn agreed.  Soon there would be concentration camps for people whose DNA the government found inferior.  Glenn tilted his head, like he couldn’t quite get his brain around that.  Probably not, he said, after a significant pause.

Now I understood why I had been dis-invited for this crazifest.  They didn’t reject my expertise – they rejected all expertise.  Expertise was problematic in that facts could not be relied upon to support the narrative.  This wasn’t a story about newborn screening; it was a story about  government power encroaching on individual liberties.  The woman from Minnesota, a petulant but mild-mannered soul who had some good points to make about the actual risks of amassing a DNA database without proper consent – a practice confined to newborn babies and convicted felons – but she was left in the dust, unable to take the necessary next step of contextualizing newborn screening in the socialization of the American healthcare system. 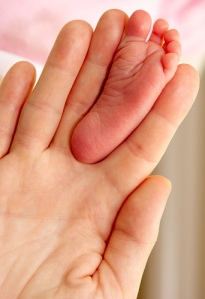 feeds into existing fears and beliefs.  The more complex the issue, the easier it is to cherry-pick facts to provide ersatz credibility.  In recent attacks on newborn screening, the underlying narrative is fear of big government, as illustrated by a CNN story last week titled: “The Government Has Your Baby’s DNA.”  Against all odds, this is actually a decent, balanced article – but if that headline doesn’t make you crazy, try reading the comments, several of which suggest that newborn screening is an invention of the Obama administration or a 21st century incarnation of Big Brother.  Death panels for the Headstart crowd.

I applaud the spirit of the many genetic counselors who immediately looked to respond to the CNN article (No one said boo about the Glen Beck Show; was I the only one watching?).  Still, I think it is important to look at two key points before formulating any response:

1. Keep in mind the narrative.  Most people cannot be expected to care that much about newborn screening except as it fits into a larger context.  The fact that you are anxious to educate them does not mean that they wish to be educated.  Therefore, if the narrative is about a government power grab (and it is), then it probably won’t help to tell people that HIPPA and GINA will keep their babies safe.  I’m guessing that they will not take comfort in knowing that Washington has created two new acronyms to safeguard their children’s DNA.

Ignoring the narrative is one big reason why the well-intentioned and well-informed have spent years dumbfounded by the intransigence of parents who continue to believe that vaccines do not cause autism.  I know it is hard to accept, but it just doesn’t help to offer someone the gold standard of peer-reviewed science when their meta-narrative is about how the medical establishment has been corrupted by for-profit entities.

You can’t tell people whose fundamental issue is that they don’t trust the government that they don’t have to worry because the government will take care of anything.  What other options do we have?  Let’s try to remember that this is not about government rights; it is about baby’s rights.  The message has to be that every baby has a RIGHT to newborn screening.  We can’t get sidetracked into defending the will of the government to defend privacy and autonomy.

2. The narrative doesn’t just obscure the facts from those who believe it; it obscures the facts from those who despise it.  Let’s not lose track of all the valid concerns that have been raised by parents who object to a lack of education and consent in the use of newborn screening samples.  As much as we would like to insure parents that a database of blood samples would never be misused, it’s a fool’s business making promises.  The only sure thing about predictions is that some of them will be wrong.  No one anticipated the development of an algorithim that could match DNA samples to individuals within pooled DNA in GWAS, which sent government agencies scrambling to rewrite the rules for use of supposedly anonymous DNA registries.  No one anticipated that a teenage British boy conceived by sperm donation would be able to use ancestry testing designed for genealogy buffs combined with a few rudimentary facts like date of birth to find his donor dad.

All other innovations in genetic services require vigilance and thoughtfulness.  But it is worth the effort, because every baby has a right to newborn screening.  We can’t sacrifice the possible to the paranoid, because that would be shortchanging America’s children.  That’s what I would have told Glenn Beck.  I might even have cried.